NPC Perspective: Coronavirus Impact to China’s Economy and the Paper Industry, and Recommendations

The full analysis is available upon request (contact us at sales.service@npcpartners.com), as well as for NPC Partners report subscribers.

Current epidemic status (as of 2nd half of February 2020)

China has had more than 70,000 cases of the novel coronavirus since the coronavirus outbreak began in Wuhan in December 2019. This outbreak has a longer incubation period than SARS and is more infectious, thus making it more damaging. Many countries and regions have also seen multiple cases. At the end of January, the World Health Organization declared the outbreak of the novel coronavirus (Covid-19) as a public health emergency of international concern (PHEIC).

The Chinese government extended the Chinese New Year holiday and restricted travel across the country to control epidemic spread.

- The daily numbers of the new infection patients had dropped continually by the end of February 22.

- Many enterprises resumed work and production from February 10. By the end of February 21, there were 18 provinces reporting that more than 50 percent of the workforce have resumed work. Shandong, Fujian, Jiangsu, Shanghai, Zhejiang, Liaoning and other coastal provinces posted more than 70 percent, according to a statistics report from the 21st Century Business Herald.

- In the core district of the outbreak, Hubei province (Wuhan is the capital city), the provincial government issued a notice on February 20 saying that, subject to strict implementation of measures to prevent and control the outbreak, all enterprises in the province should return to work no earlier than 24:00 on March 10. Relevant industries and enterprises involved in epidemic prevention and control and public necessity are excluded.

A preliminary observation of the economic impact of the outbreak

China's GDP growth is expected to remain at 5.4 percent in 2020 provided that the outbreak is brought under control in March or April this year, and current and upcoming stimulus packages by the government achieve the expected outcome.

The NPC Partners study also draws on preliminary assessments of the impact of the novel coronavirus outbreak on the Chinese economy from international economic research institutions such as World Bank, Standard & Poor's, Bain, Moody's Analytics, and Oxford Economics.

Therefore, we reduced China’s potential GDP growth by 0.5 percent in the NPC Partners industry forecast model in 2020 because of Covid-19, or RMB 500 billion (based on the total GDP in 2019).

The impact of the virus on China and the global economy is expected to be greater than the SARS outbreak in 2003. China now contributes 17 percent of global GDP, but in 2003 only contributed 4 percent. China's share of world trade is close to 12 percent, surpassing the United States. Based on China's current position, the shutdown of some industries will have a significant impact on the global supply chain and also highlight the challenges and importance of future supply diversification.

The Chinese government has announced a series of policies to help companies resume production, to motivate consumption and stimulate the economy, and give more anticipated support policies. For example, the phased reduction and exemption of relevant fees and taxes was announced by the State Council on February 20, which is expected to save 500 billion yuan in total for corporations. The Chinese central bank also injected a total of 1.2 trillion yuan into the financial system on February 3 to increase liquidity.

Given the nature of the novel coronavirus and the measures taken by the government, the downstream sectors of packaging related to consumer spending in China have been hit hard and are likely to be hit the hardest, such as retail, catering, and transportation. The industrial sector was also adversely affected by disruptions in sales, labor inputs, production, and logistics. Still, the impact will depend on the duration of the outbreak, as well as the strength and scope of policy offsetting the negative impacts.

1) Paper mill production can soon largely recover, but there are challenges in the supply chain:

According to a survey conducted by NPC Partners in mid-February, with the exception of Hubei province, the outbreak center of the novel coronavirus, most paper mills in China resumed some production in early February. Paper production in Hubei accounts for only about 3 percent of the national output (2018 figures).

In some areas, paper mills did not shut down for the Spring Festival holiday, so their production was not affected at all. Still, many paper mills face challenges in raw materials and logistics, but the problem is expected to ease in the short term as the government steps up efforts to support resuming production.

2) The recovery and rebound of end-use demand/consumption are optimistic:

Firstly, China is leading the world online retail scale and is expected to grow even faster during the outbreak. During the outbreak, residents will go out less, while online shopping and O2O will be more active.

Secondly, during the virus prevention and control period, some consumption will be boosted. For example, in order to prevent infection, the demand for medicines, related sanitary products, household appliances with anti-virus function, and healthy foods will increase greatly. In addition, according to the sales data of Suning, one of the major retailers in China, the sales of computers, wireless mice, Bluetooth keyboards, and other electronic products that can be used for working at home increased by more than 100 percent during the first week of returning to work on February 10.

Finally, the relevant consumer products retail data during the SARS period such as clothing, alcohol, tobacco, and beverages suggests that a "retaliatory" rebound in end-use demand is likely to emerge after the virus outbreak control ends. The government is also expected to formulate pro-consumption policies to further promote e-commerce and green and healthy products.

According to an analysis by NPC Partners consultancy, SARS had a limited impact on China's paper industry in 2003. In 2003, the main business revenue of China's paper and paper products industry was about 243.2 billion yuan, an annual increase of 24 percent. From a quarter-on-quarter perspective, the growth rate of main business revenue was basically in line with the cyclical characteristics of the industry cycle (Figure A). During the second quarter of 2003, the most severe SARS period, business performance quarter over quarter was not changed much from the previous year and the next year. 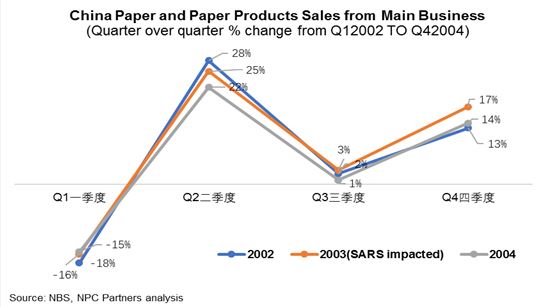 In terms of paper and board prices, the average price change in 2003 was not much different from the average price change in 2002. Looking at the change on a monthly level, however, brings different results: taking packaging paperboard grades as an example, the year-on-year price of corrugated paper rose sharply in the first four months of 2003, while the increase in kraft top linerboard was more moderate.

In the outbreak crisis, paper companies in China should not just wait and see, or be confined to a single industry perspective. Rather, it is better to adopt new tools and new thinking, in order to turn the crisis into an opportunity.

Amid the new market changes, especially the emergence of new drivers such as environmental protection and import of solid waste policy reforms, the China-U.S. trade war, and the novel coronavirus, China and the global paper companies will need more new analytical tools and strategies to respond to the uncertainties and challenges and better manage growth. Paper companies can also draw on a series of innovative and powerful analytical tools developed by NPC Partners Consulting (Figure B). 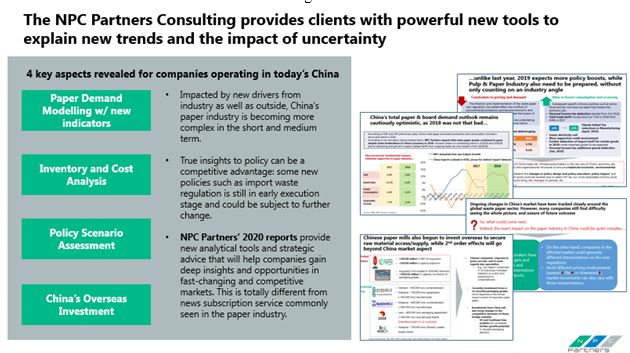 NPC Partners is a premier, innovative consultancy with experienced industry and management professionals committed to assist our clients in the paper industry and related industries in developing powerful solutions.